Going by the name of „LEBENSLAUTE“ (Life Sounds) musicians from all over Germany have been gathering annually since 1986 to form a full chorus and symphonic orchestra. On a regional basis there have been smaller but more frequent projects.

We are an open group combining music with social action and perform mainly classical music in public places where this is not usually expected: on the grounds of military training areas, inside the halls of airports to prevent deportations, at nuclear production plants and rocket depositories, as well as the offices of the Department of Alien Residency and other places where human life is threatened.

In our choice of concert locations we are not swayed by official regulations; on the contrary Lebenslaute  actions seek confrontation through previously announced and conscious civil disobedience. Our serious concert attire highlights the legitimacy of our concern. Whenever possible we strive to strengthen and support local protest movements.

We prepare ourselves cooperatively and intensely for our concert actions and act in a united fashion. Each participant is responsible for himself/herself and decides to what degree he/she is willing to actively disobey the laws and regulations involved. Our decisions are made on the basis of mutual consent / grassroots democracy, the needs and concerns of all participants are taken into account. Those faced with possible legal ramifications are supported by the mutual solidarity of the Lebenslaute network and other cooperating groups. 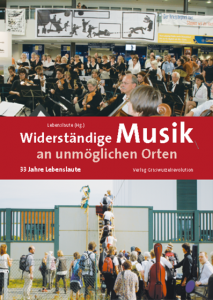